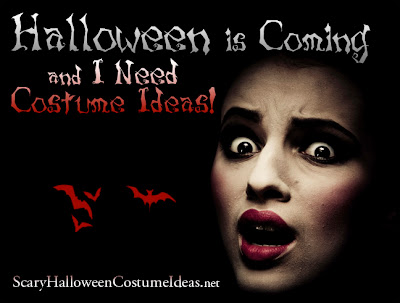 I know that it's only September, but I'm already excited about Halloween. I usually start planning for this in January or February, and well, I still don't know what I'm going as.
This makes me feel antsy.
I know I still have another month to decide, but the sooner I decide, the less stressed out I'm going to be. I decided that I don't want to make my own costume again this year and I'm perfectly okay with that. I know pre-made costumes can be expensive, but usually when I make my own, I end up spending more then that anyway. So to me, the ends justify the means and I'm still, if not more than, satisfied.
But what am I going to be?
I've spent the last few days perusing costume websites and visiting my local costume shops and I'm still confused, but I do have some ideas.
This is where you come in. I'm going to post a bunch of pictures of costumes that I like, explain why I like them and you get to decide.That's right,
YOU GET TO DECIDE!
You can barley contain your excitement, I know, I know, I understand.
Okay, so I'm going to break these up into categories, starting with
CUTE COSTUMES
Minnie Mouse

I'm a Disney fan, you know that already. But my all time favorite Disney character is Minnie Mouse, so much so, that I want to get a Minnie bow tattooed onto my wrist at some point.
I've dressed up as Minnie Mouse before, but not since I was a kid.
Plus: I was adorable as Minnie then and I would still be adorable now
Minus: I don't really like that it's a halter dress, but the cute stocking with the bows might just make up for it.
Strawberry Shortcake 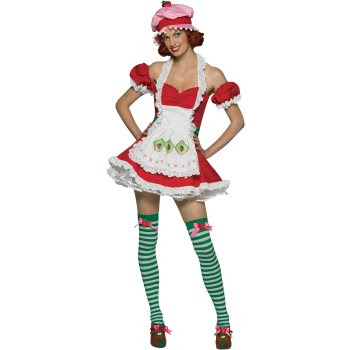 This was actually my first idea when thinking about costumes. I was actually thinking it wouldn't be hard to make, but then where would I ever find a hat like that? I was thinking that it would be cute to do my hair up in tiny little braids and dye them bright red to look like yarn hair.
Plus: I really want to do the yarn hair and I'm cute (and modest) enough to pull it off
Minus: Again with the halter dress. Also, I'm not a huge fan of the stockings, I'd prefer the old school, wide stripes, but then I'd have to go out looking for them. The biggest thing (and probably the shallowest as well) is that I hate the way the girl looks in this picture and it makes me want to wear it less. And her leg just looks way too wonky! 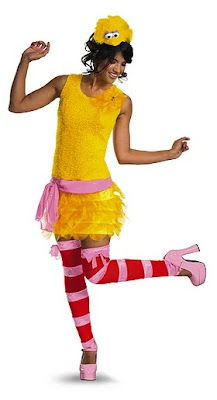 I know, I know, this is totally ridicules. But it's soooo cute! Just look at those leggings and how the dress is all flapperish.
Plus: It's super cute!
Minus: This costume baffles my mind. I mean who thinks of Big Bird and then decides to make a sexy women's costume? I just don't get it! 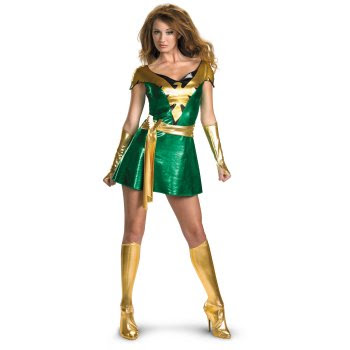 Phoenix is probably my favorite Superhero. I love Jean Grey. Now this isn't her traditional outfit, but I can't seem to find anywhere that carries it. But still, Hooray Phoenix!
Plus: Well, it's Phoenix and I love the belt!
Minus: I feel like I've done this before. I mean, I did go as Marvel Girl to Fan Expo last year and that costume was all green and yellow. This is another one of those pictures that I hate how the girl looks. 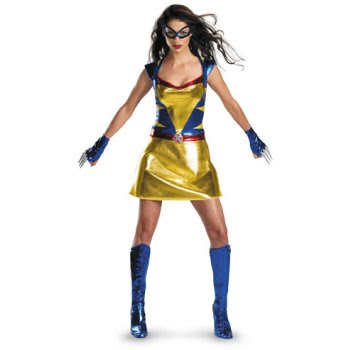 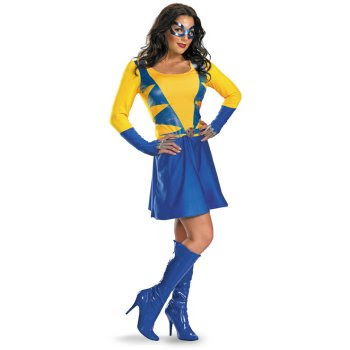 As you can see, this costume comes in shiny and non-shiny. I'm not really a fan of Wolverine's. I think he's an ass and I'm not really sure why he's every one's favorite. The only thing that ever made him redeemable in my eyes was his love for Jean. Anyway, I think this costume is hilarious. I want to spike my hair up like his, paint my lips bright red and chew on the end of a cigar all night.
Plus: I think this costume would be really fun to play up. You just know that those claws come with attitude.
Minus: Where am I ever going to find blue boots? 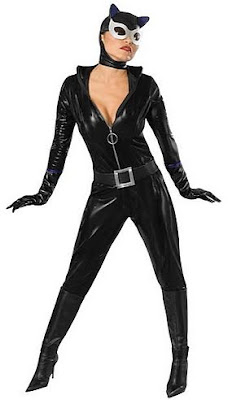 Holy Catsuit Batman! This is probably the best Catwoman costume that I've ever seen! Meeeow! She's not my favorite Batman villain, but she's also not overdone like Harley Quinn or Poison Ivy.
Plus: This costume is SEXY! It's probably up there as one of my favorites.
Minus: I'm not huge on the idea of having a mask that actually obstructs my vision. Also, I went out as Robin last year for Halloween, should I do Batman again this year? (snicker...do Batman...) 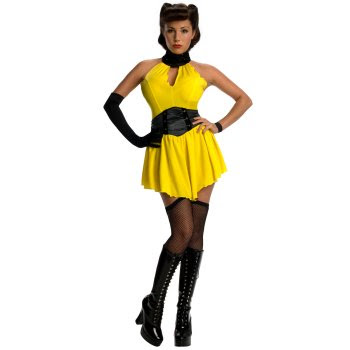 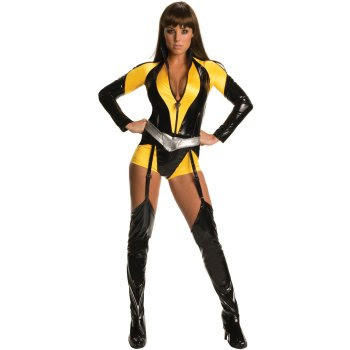 This costume comes in both Sally and Laurie. I probably lean more towards the old school Sally Jupiter costume, just because I like it better (and it has victory rolls!), although Laurie's costume is so right in all the wrong places.
Plus: Both these outfits are sexy and fun. I think Sally's costume is at the top of my list.
Minus: I'm afraid that these costumes are going to become the new Wonder Woman/Slave Leia/Poison Ivy costume where you see it so much that it takes all the fun out of it. If I go with Laurie's costume, I'm going to have to buy a wig :( 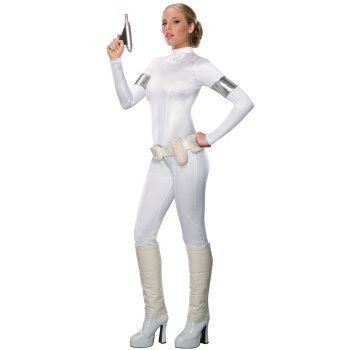 This costume also come in post-Nexu attack with exposed midriff, but like HELL are you going to get me into that this year! I searched and searched for this costume last year, but only found it after I had already bought my Robin costume and didn't have any more money to spend on it. I've wanted to do this costume for years now. Perhaps this is the year.
Plus: I can finally dress up as Padme!
Minus: This costume looks very unforgiving and that worries me.

This costume made me fall in love with Star Wars. It's the reason that I watch Episode I

. It makes me want to learn how to sew properly so that I can make it correctly. I love this dress! If I got this, I would cut holes in the mask and weave hair (either mine or synthetic) through it to make it look a lot better.
Plus: Probably my favorite costume of all time!
Minus: This is a really shoddy version of my favorite costume of all time. It looks really cheap, although I hope the hair would help a little bit with that. 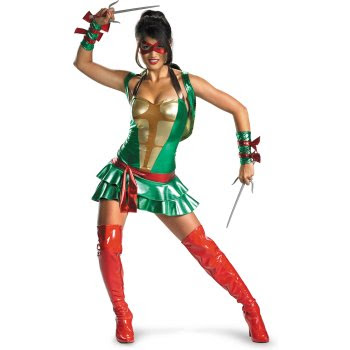 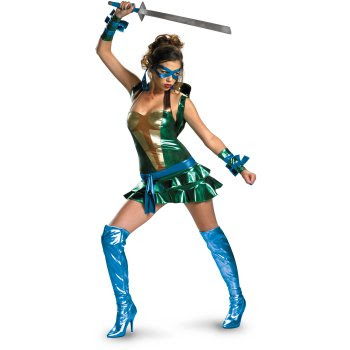 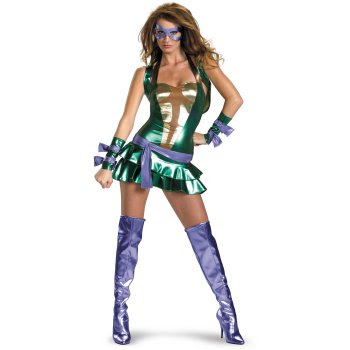 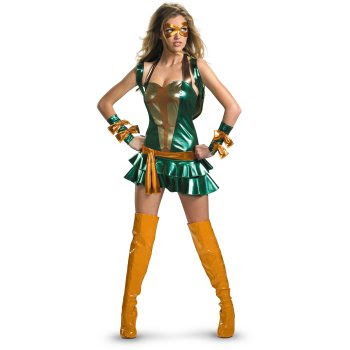 These Heroes in a half shell ended up in less than half a skirt! But who could resist dressing up as Leonardo, Donatello, Raphael, or Michelangelo? And if I do pick one of these, how am I ever going to choose? Or get matching boots?
Plus: These half shells that come with them are actually backpacks! That means I could actually carry my own wallet and lipstick with me this year instead of making someone else carry it for me! That is a HUGE plus as far as I'm concerned.
Minus: I'm not sure I could go the whole night acting like a Ninja Turtle. I'd probably have to go back and re-watch all of them. I guess that's not really a bad thing though. 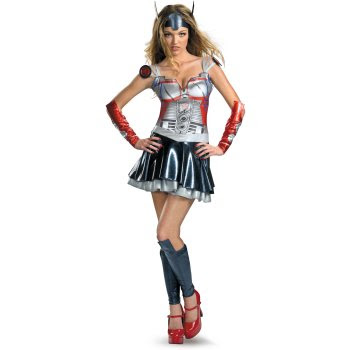 This costume makes me laugh so hard! If they hadn't already pushed the envelope with Big Bird and TMNT, they finally went too far with trying to mix sex with our culture. Hell, that is one sexy transport truck!
I want to wear this outfit just to say that I did and to explode the minds of all the geeks I see.
Plus: Optimus Prime + Sexy = Head Explosions
Minus: Trying to explain to others why I dressed up as a sexy Mac Truck for Halloween 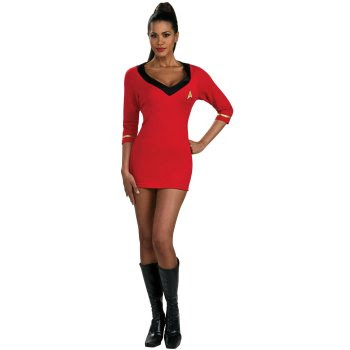 Can you imagine me of all people in a Star Trek uniform? Boldly going where no Star Wars geek has gone before? Don't get me wrong, I like Star Trek, but they didn't get costumes like these on TNG.

Plus: This would totally mess with my Star Wars friends. I could pull this off really well. Would probably up my geek cred.
Minus: I would probably feel awkward if I got approached by Trekkers and couldn't keep up with the conversation. Possibly lower my Star Wars cred.
Alright, that's it. Have fun going through all of them and deciding what I would look hottest in. I look forward to hearing what you have to say!