Wastin’ Away Again on Tatooine

From the makers of Midichlorian Rhapsody comes another well thought out and well put together song. It's not quite as funny as the other one, but well, I still liked it.
I enjoyed that they decided to blame Luke for the entire thing. I mean when you stop to think about it, Luke's plan to get Han back was pretty crazy. 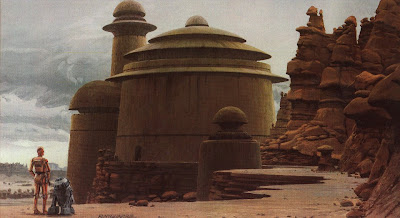 This was #3 on Topless Robot's list of why Luke is a complete idiot
His Insanely Stupid Plan To Rescue Han Solo from Jabba The Hutt
Let us imagine that Luke Skywalker is trying to tell you his plan to rescue Han Solo from Jabba the Hutt.
Luke: "Okay so, first we get Lando Calrissian posing as a guard inside Jabba's Palace."
You: "How do we do that?"
Luke: "We just get him a costume and he--just walks in."
You: "Um, okay, say it's that easy. So then Lando gets Han out of the carbonite and we pick them up and get away?"
Luke: "No. What happens next is that I put my lightsaber in a hidden compartment in R2-D2 and send R2-D2 and C3PO to Jabba the Hutt as gifts."
You: "Wait, why-" 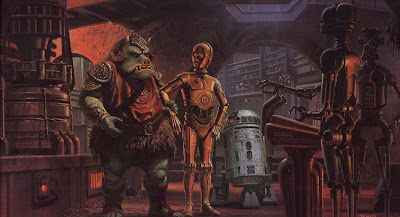 Luke: "Just listen. Next we have Leia pose as a bounty hunter arriving at Jabba's palace with Chewbacca captured. She's going to hand over Chewbacca to Jabba."
You: "Wait, why? Wouldn't that mean we would now have to rescue Han Solo, Chewbacca, R2-D2 and C3PO? That just makes it more difficult, right?"
Luke: "Just go with me here. Next, Leia is going to sneak around at night and get Han Solo out of the carbonite, but get captured."
You: "What? Why would we get everyone captured like that?" 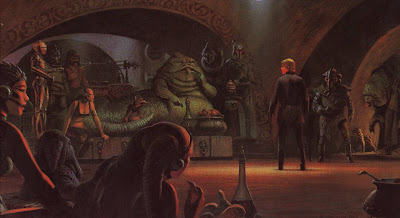 Luke: "Now I'll show up, use my Force powers to get in to Jabba's fortress, get past the guards to an audience before Jabba and then use my Jedi mind trick to get Jabba to release everyone. If that doesn't work, then I'll get captured." 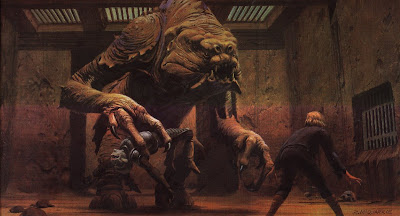 You: "Okay, if you can just use your Force powers to get in to the palace and all the way to Jabba, then let's just have you go in right now and get Han out."
Luke: "No, that's stupid. I'm going to get myself captured. Because then you see, we'll be taken to the sarlacc pit and then, when we're on the skiff, I'll get sent out first and then R2-D2 will manage to get to the top of Jabba's sail barge and shoot out my lightsaber, and then with Lando's help, we'll just--rescue everyone and then everything will be fine!" 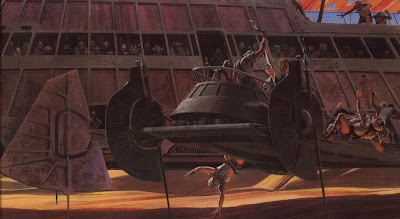 You: "That is the stupidest plan I've ever heard of."
Luke: "I've thought of everything."
You: "Clearly you didn't."


Now I don't actually think that Luke is an idiot, I do however think that it made for a much more fun scene in ROTJ. (Actually I think it's my favorite part of the entire movie)﻿
But back to the video. I love that they managed to get everyone into it, including the band 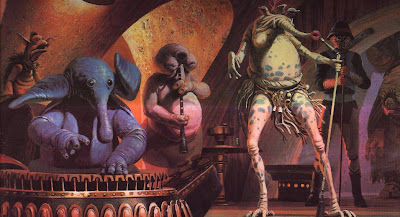 I have a soft spot for Max Rebo, the piano playing, blue elephant-looking guy. According to Wookieepedia, he eventually left the music industry, and opened his own chain of restaurants: Max's Flanth House. He became quite rich, and finally settled on Coruscant. Go figure.
I could've done without Sy Snootles, or at least the extended CGI version of her. But hey, at least there's dancing girls, right? 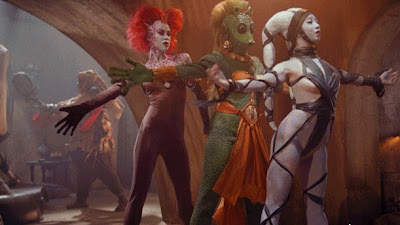 Sorry, I ran out of Ralph McQuarrie art, so here's an actual picture.
I also love the part about Leia. The line about pissing off a woman in a thong made me laugh out loud, even though we all know that there's no underwear in space!
That's right boys, she's got nothing on underneath that skirt ;) 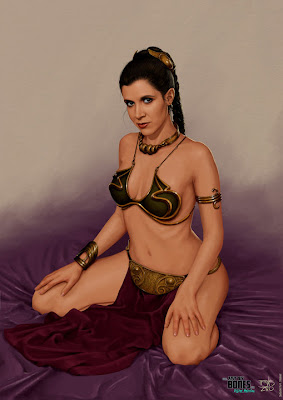