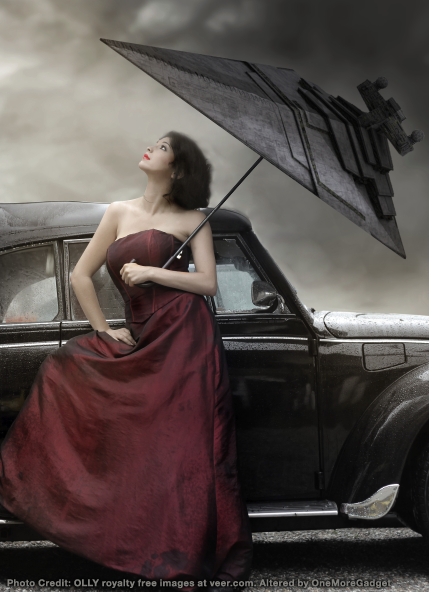 Introducing ‘The Star Wars Star Destroyer Umbrella’. A unique triangular shaped umbrella that folds up just like any other ordinary umbrella. But unlike other umbrellas, this one can withstand the force of a hurricane. Or an attack of a rebel fleet. In space. Warp speed stylez.
The handle is a similar material to the graphite shaft of a golf club, the waterproof fabric is adhered tightly to the frame and all this awesomeness actually weighs less than a golf umbrella with the coolness factor of 100. And when I say coolness factor I mean factor in the chances of never seeing a woman’s genitals ever again.
Unfortunately the Star Destroyer Umbrella is just at concept stage here at OneMoreGadget but as always, we’re open to offers!
I guess those guys over at One More Gadget don't know of the existence of Geek Girls like myself. Because if they did, they'd know that a man walking down the street with a Star Destroyer Umbrella probably has a better change of seeing my genitals then a man with a normal boring umbrella does. Just me?
Anyhoo, this is probably the coolest umbrella I've ever seen! I really hope that they actually decide to take this concept and make it real, although I don't really know how it will fold up correctly. Maybe it'll end up like the Tauntaun sleeping bag, which had so much interest behind it, that they ended up actually making one. I know I would totally buy one and then name it Gorgon after Admiral Daala's ship in The Jedi Academy Trilogy

. I thought about calling it the Executor, but I figure that's what everyone will name theirs. ;)
Posted by Braeby at 9/20/2010