Star Wars Being Made Into 3-D? 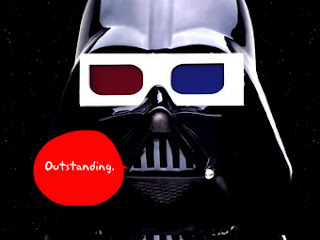 Rumors have been floating around about it for quite some time, but it appears that all systems are go for the entire Star Wars franchise to be re-released in the 3D format. DreamWorks Animations CEO Jeffrey Katzenberg confirmed the details in a recent interview with Comingsoon.net saying "Lucas is excited about it" and "He isn't going to put a product out, I think, that isn't anything other than first rate."
Apparently, the cost of converting a traditional 2-D movie into 3D is between $50,000 and $100,000 per minute. I'm sure that Lucasfilm will make their money back and then some, but is it really worth it? Does anyone care to see this or is it just another case of Lucas screwing around too much with the franchise?
Gizmodo doesn't seem to excited about the prospect of these upcoming releases, and who can blame them really? Lucas has been known for milking every penny he can from the Star Wars franchise and this is no exception.
That doesn't mean that I'm not totally excited about it though!
I'm sure we'll all hear a lot of moaning from fans about this, just as they did for all the other re-releases that have happened over the last 30 odd years, but I imagine when they come to theaters, all those moaners will be lined up beside me excitedly waiting for our first chance to truly be apart of our favourite films. Yes, yes, they're going to start at the beginning of the saga, as in Episode I

, but I'm just fine with that. Unlike most Star Wars fan, I do truly love them all.
Of course seeing the originals in 3-D is going to be spectacular, but I can wait, and boy will it be worth it.
Posted by Braeby at 9/29/2010