Talk Geeky To Me

Talk Star Wars To Me
It's Sexy

Now, you all know by now that that's my motto.

Looks like I'm not the only one who thinks that way.
I've been perusing Red Bubble as of late and I came across Trekvix (which is an awesome name, btw)
Trekvix, also, seems to believe in geek love. And I love her for it.

Now do you see why I'm so excited? These are fantastic!!! I want all of them! Well, most of them. Some of them aren't my fandom, but I'm soooo glad that she covers all sorts of fandoms for all sorts of different geeks! Maybe I can talk her into making me a Star Wars one ;)

As I always say; get out there and talk geeky to someone
Posted by Braeby at 4/25/2013 No comments:

It's April, and you know what that means?
It's time to start thinking about Halloween! Or at least Con season.

I always find it strange that new Halloween costumes start coming out in April. Seems a bit early to me. But I guess one can never be too prepared.

Plus, more Star Wars costumes for women! YAY!
They're not just Star Wars and they're mot just for women, but I like that I'm the target audience for most of these. I love this new Darth Talon costume. Well, except for the weird inflatable head piece. That thing's strange...  The rest of the costume is pretty good, though. 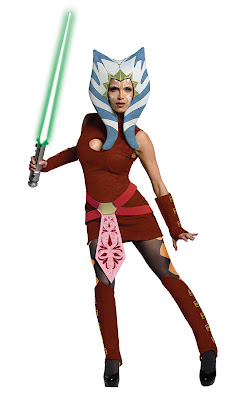 I'm happy that they went with the more adult Ahsoka Tano look. It's easier to paint your arms and face orange than the whole top of your body. If you're going for authenticity, that is.

I'm not sure how I feel about the whole sexy, Femtrooper look. Ok, it's not that. I've never really felt the appeal of dressing as a Stormtrooper, but if I did, I'd want my armor to look less plastic-y. 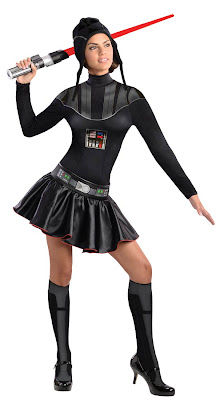 I, however, LOVE THEM! (don't judge me)
I know, I know, what's with the weird skintight schoolgirl look? Why not just give women normal costumes that actually fit us properly instead of these weird hybrid outfits?
I don't care. I want them all! Especially the X-Wing Pilot, promptly followed by the Darth Vader, Boba Fett and then the Stormtrooper!
The one thing I really don't get about these costumes are the toques. They seem kind of out of place. They're awesome, (except for the Boba Fett one. It's totally lame) but don't match the costumes at all. They'd be better off selling them separately.
Also, I would totally wear these shoes with the Boba Fett one. Perfect, right? 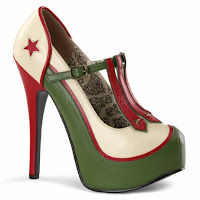 You thought those costumes were weird? Here are the really strange ones, and they're not even aimed at women! (although women could still wear them, these are actually aimed at men)
Be warned. What is seen cannot be unseen

yeah.... I warned you.
Now, there's nothing wrong with these per-say, (except for the Chewbacca one. That thing is terrifying) and if you're into this sort of thing, all the power to you.
I have pretty awesome body confidence, but even I wouldn't feel comfortable in these. Add a ruffly skirt to it and then we can talk ;)
The Darth Maul one would work really well with a pair of black pants over top and glued on horns, making it the most realistic of the 3 costumes. I don't have any suggestions for the Darth Vader or Boba Fett ones, though.
My final thought on these is this; what type of shoes do men wear with skin tight, Star Wars costumes? Ponder it and let me know what you come up with. 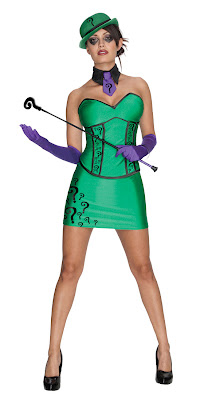 Want to be Harley Quinn? Who doesn't? The thing about that is that she's beginning to be played out. So how can you breath new life into her? By making her Sexy

No? How about by being Arkhan Assylum Harley Quinn? 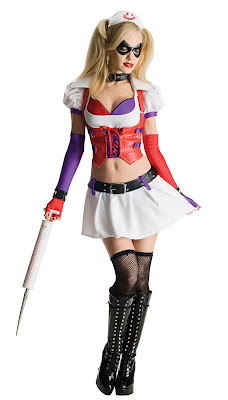 Still to played out? How about Arkham City Harley Quinn? 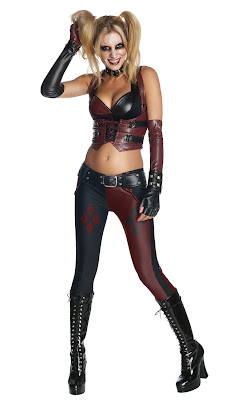 Still not feeling it? How about Harlequin one that's doing it's best to be Harley Quin without actually being Harley Quinn?

One small rant about these pictures.... Why do they all look as if they've been crying? Are they crying because they're bad? I don't really know what the make-up people were thinking with this look.

Like the Star Wars dresses, these are a little odd, but super cute! I would wear the Kermit one and the Animal one all the time! I love the ears that come with Miss Piggy's dress, and the bangles that come with Animal's are divine! My favorite accessory is The Fozzy neck-tie/belt! What a super cute idea! 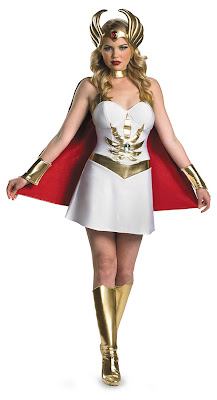 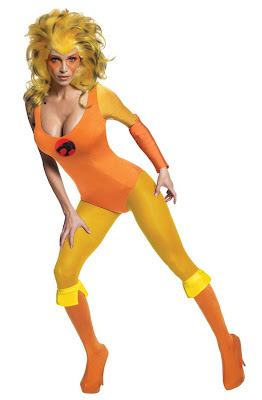 The She-Ra outfit isn't new, but I still really love it. I would totally love to dress up as her. She was one of my hero's growing up, as well as Cheetara. The wig is kinda horrible, but that just makes me like it more. This costume does seem to be lacking some spots, but those could easily be added on later.

Now, this last one isn't really 80's, other that I remember it from then.

Do you remember Fun Dip?

I do, but not like this...
I know I've done dresses like this before, but this one is just weird and kind of creepy, especially compared to the men's costume. I can just imagine the inappropriate comments about it, especially with that lick-a-stick...
Just a quick reminder; Cosplay IS NOT Consent!!
Not that you probably need reminding, but it's always good to throw out there anyway.

So, what costumes would you choose? I'm still leaning towards sexy X-Wing!

Thanks to Club Jade for the Star Wars costume info. Now go out there and get cosplaying!

Life is hard sometimes
and busy

Sometimes we get so wrapped up in life that we forget to slow down and relax.
You know what I like to do when I'm stressed out? 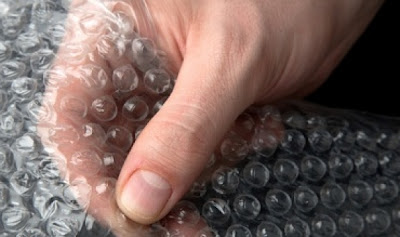 You thought I was going to say something like watch Star Wars or read comics, didn't you?
As much as I do find those things help, some times I need something more physical to release the stress. Bubble wrap does just that.

I imagine that's how Link feels. 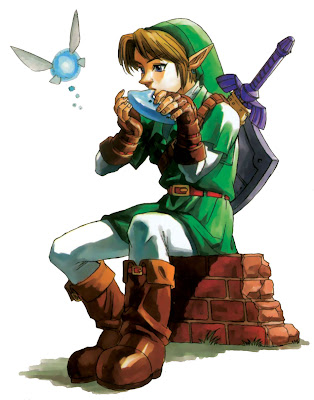 One minute you're just hanging out in your normal county life, doing normal country things, the next, an old man is shoving a sword at you telling you that you need to go find some princess with a weird name. Oh, but to find her, you have to travel across the country, fight monsters, solve crazy puzzles, learn an instrument and kill a giant pig man monster. But don't fret, take this annoyingly chatty fairy with you. She can't fight, but she will nag you the whole time.

It's enough to make anyone go crazy. But Link found a way to make the best of it. He found his own Hyrulian bubble wrap; breaking pots.

Yes, Link is a menace to anything pot like.

Lindsay Sterling, of geek girl music fame, shows us just how fun and stress relieving it can be

Although, not everyone feels the same about it. 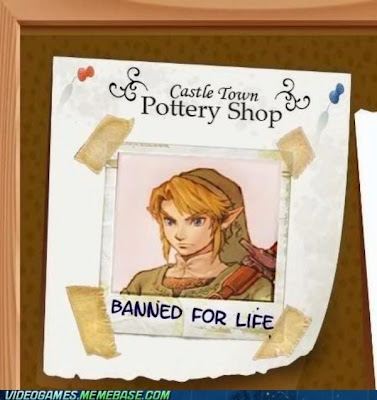 If you need some stress relief and don't feel like being banned from pot shops, check out this awesome bubble wrap game.
Posted by Braeby at 4/02/2013 No comments: