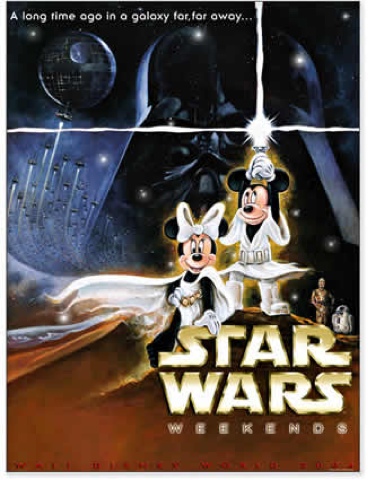 Yes, you read that right. Disney, who I have been a long time fan of, is buying out my favorite franchise!!!

"Walt Disney Co has agreed to buy filmmaker George Lucas's Lucasfilm Ltd and the "Star Wars" franchise for $4.05 billion in cash and stock, a blockbuster deal that includes the surprise promise of a new film in the series in 2015.

Disney Chief Executive Bob Iger, in prepared remarks for analysts, said the plan was to release a new movie in the series every two to three years thereafter. The last "Star Wars" picture was "Revenge of the Sith" in 2005, and Lucas has in past denied any plans for more.

Lucas, a Hollywood icon known for exercising control over the most minute details of the fictional universe he created, will remain as a creative consultant on the new films." - Reuters


I'm not sure if I came across excited on not. To be honest, I'm not sure how I feel about this entire thing. I'm hoping that if they're going to make more movies that they will go for the Thraw Trilogy. I for sure don't want to see the whole franchise rebooted. That would break my heart.

I'm a Disney kid at heart, so I'm going to put my faith in them and hope for the best.

Disney has had a lot to do with SW in the past, with rides at Disney World and, of course, Star Wars Weekends and Star Wars Celebration. It's things like these that calm the knots in my stomach.

Also, on a side note, Disney will also have the rights to Indiana Jones as well. After the last movie, Disney can only do good things with these.

So, what do you think about all of this? Are you as conflicted as I am?